Much better harvest than last year - probably 2-3 times more pods on each plant!  Luckily our family from Bedford visited today to help pick - they picked 11 five gallon buckets of pea pods, which made 2.5 buckets of shelled peas.   But this accounted for only 1/3 of our pea patch....the rest will have to wait until Friday evening and Saturday.

Luckily there are still mechanical pea shellers available for custom shelling, for just a few dollars - and within a few minutes - we got all our peas shelled at a farm in Newville.

Posted by The Long Shot Farm at 9:58 PM No comments:

We are still working on the trellis systems for the "Triple Crown" blackberries and the "Vidal Blanc" grapes.  Drilled more holes, set and pounded posts and went to Lowes twice today to purchase more posts.

Jeff plowed and disked the area above the  "Vidal Blanc" grapes and planted the rest of the "Incredible" corn, and 5 rows of "Silver King" corn.   Tina continued working on the new "Jam and Smoothie" garden and we also planted 20 "Sweet Ruby" pepper plants, 25 "Big Dipper" green peppers and 35 Basil plants - then we had an massive storm front with driving winds and thundershowers put a stop to all planting for the day :(
Posted by The Long Shot Farm at 11:22 PM No comments:

Our one year old plants (Triple Crown) have been growing like crazy with all the rain we've had this week, and the tractor barely fits above the plants anymore, so we're concentrating on drilling all the post holes for the trellis posts in this patch, before the brambles grow higher
The posts are approximately 30 ft. apart - or roughly every 8 berry plants.   We marked the spots for each post with a squirt of spray paint.   We are using our "skinny" auger in the post hole digger - and it definitely works best when sharpened!  Jeff also found that it works a lot better with some extra weight above the auger - hence the creative rigging of cement blocks :)

The posts line up with those we set last year - our "Apache" patch, which is now in its third year ... and looking amazing!

Posted by The Long Shot Farm at 9:33 PM No comments:

Email ThisBlogThis!Share to TwitterShare to FacebookShare to Pinterest
Labels: blackberries

Just a quick update on our garden progress at the end of the weekend: 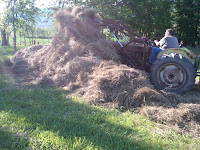 Legalities of Growing Currants and Gooseberries

There is a funny thing about the growing of currants and gooseberries (also referred to as Ribes)...I first realized that something was odd, when we moved to the US from Germany, and tried to buys these berry bushes without success.  (that was in the 80's)... turns out that in the early 1900s, the federal and state governments outlawed the growing of currants and gooseberries to prevent the spread of white pine blister rust.  Although the federal ban was rescinded in 1966, some northern states still prohibit the planting or cultivation of black currants. For example, New York state did not legalize the growing of Ribes until 2003.

According to Penn State's College of Agriculture, Pennsylvania passed a law in 1933 that limited growing gooseberries and currants in certain areas; however, the law is not enforced. Therefore, all Ribes can be grown in the state.

The ban was established because gooseberries and currants can serve as alternate hosts to white pine blister rust (Cronartium ribicola), a fungus that needs both Ribes and white pine to complete its life cycle.  So if you have white pine nearby,  you may want to consider growing less-susceptible types of Ribes. Black currant (Ribes nigrum) is by far the most susceptible, and for this reason many areas outside of Pennsylvania still prohibit growing it. Resistant black currant varieties are available. Red and white currants are less susceptible, and gooseberry is the least susceptible.
(information from PSU and Cornell)
Posted by The Long Shot Farm at 10:34 PM No comments:

Email ThisBlogThis!Share to TwitterShare to FacebookShare to Pinterest
Labels: fruit

Spent most of the day planting garden (not done yet, but made progress):
Bought irises and pussy willow plants at a yardsale, and got a flat of melons, gooseberry and currant bushes and a black raspberry plant at the greenhouse.
Posted by The Long Shot Farm at 9:40 PM No comments: 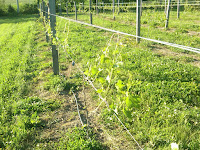 Now that the wedding weekend is done, it's time to get caught up with our garden and grapes.  Jeff and Duff installed the second level of catch wires for the Chambourcin grapes earlier in the week, and started trimming and thinning the grapes.  We finished the last row this evening.

Earlier today, Jeff picked up more fertilizer (at the Cumberland Valley Co-op), and planted our first "batch" of corn - 5 rows of Spring Snow, an early sweet corn with only 65 days to maturation and as the name implies, it is a white corn.  Funny thing is that this variety was not sold by weight, but by the number of seeds - we bought 5000 seeds and used straight 10-10-10 fertilizer (about 100 lbs of fertilizer for this section of ground).  He also planted 3 full rows and the short rows behind the pea patch with "Incredible" corn.
Posted by The Long Shot Farm at 10:45 PM No comments:

Since it was a "Barn Wedding", all the wines we served were home made and most of them were country wines, including: 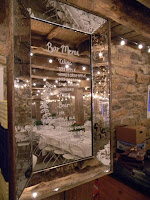 All the beer was homemade as well, not by us, but by the bride and groom.  The bar menu was written on a mirrored antique serving tray.

Posted by The Long Shot Farm at 9:40 PM No comments:

Email ThisBlogThis!Share to TwitterShare to FacebookShare to Pinterest
Labels: wine

We spent all week getting ready for the wedding - planting flowers, mulching, weeding, mowing, cleaning, decorating and setting up.  It is finally all coming together for our barn wedding:

We finished the downstairs barn renovation project:
All this in less than a year - and just in time for the wedding! 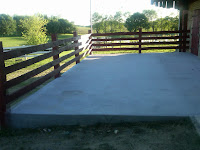 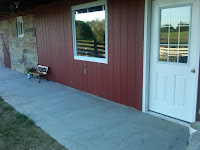 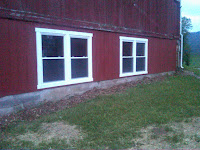 Posted by The Long Shot Farm at 9:54 PM No comments:

What Color to Choose

Finally finished "mudding" and sanding all the drywall - quite a challenge with all the crooked old beams and rough edges.  Even found time to "prime" the drywall during the week.  We finally had to make a decision for the color of the walls - our choices, we decided, were limited by the colors found in the various stones of the barn walls.  Upon closer examination of the stones, there were a myriad of colors.  Jeff's preference was for a "real color", not another version of beige or brown, which narrowed our choices somewhat.  We ended up narrowing our search to a rosy sort of brick color or a darkish purple.  We got chips from both rocks, took those to Lowes and tried matching them to paint strips - then bought 4 sample colors.  The dark purple shade, called "Smoked Mulberry"  was the one!

About The Long Shot Farm

An idyllic farm at the foot of North Mountain, just north of Carlisle, PA where we have been growing grapes, berries and other fruits for the past ten years. We are happy to announce that we finally opened our winery, The Winery at the Long Shot Farm, in March of 2019.

late summer at the pond